by admin
in Slider
0

Sri Lanka has revealed plans to install a massive military complex on hundreds of acres of traditional Tamil land already occupied by the armed forces instead of returning them to civilians.

A senior government official has confirmed that nearly seven hundred acres of land in the former battle zone has been acquired to build a naval base in north eastern Mullaitivu.

Vast areas of the heavily militarised Mullaitivu district have been occupied by security forces in the wake of heavy bombardment that killed tens of thousands of unarmed Tamils more than eight years ago. 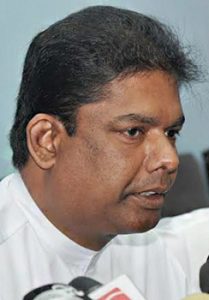 In an extraordinary gazette notification in August 2017, Minister Gayantha Karunatilake announced that 671 acres of land (271.6249 Hectares) in Vadduvakal and Vellamullivaikkal in the Mullaitivu District will be acquired for what it calls “a public purpose”.

However, the minister had failed to explain the precise use of the land.

Responding to a Right to Information (RTI) request by Vikalpa news website editor Sampath Samarakoon, the ministry of lands and parliamentary reforms has confirmed that the 671 acres will be for the exclusive use of the navy.

In a letter to the Vikalpa editor Additional Secretary to the Ministry LBSB Dayaratne says that the “public purpose” is to “establish the Mullaitivu main camp of the Sri Lanka navy”.

In September, head of the UN rights body voiced the frustration of the war displaced Tamils who have been on a continuous protest for over ten months demanding the military to release their land.

“In the North, protests by victims indicate their growing frustration over the slow pace of reforms. I encourage the Government to act on its commitment in Resolution 30/1 to establish transitional justice mechanisms, and to establish a clear timeline and benchmarks for the implementation of these and other commitments,” Zeid Ra’ad Al Hussein told Sri Lanka.

In the Resolution adopted in 2015 by the UN Human Rights Council, co-sponsor Sri Lanka committed itself to probe alleged war crimes during the last stages of the war. 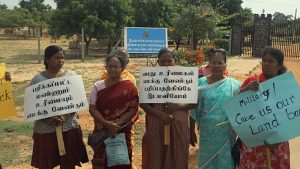 An earlier UN investigation had found that at least 70,000 civilians have been killed in indiscriminate bombing in the area where Sri Lanka plans to build a naval base.

Fears have been expressed that vital evidence crucial to a war crimes probe could be lost forever once that land permanently comes under the military.

Statement on the case against Tamil activists instituted by Attorney General Department of the Government of Switzerland!

Statement on the case against Tamil activists instituted by Attorney General Department of the Government of Switzerland!