GENOCIDE RAVAGES THE TAMILS AS THE WORLD TURNS A BLIND EYE – OPINION BY TREVOR GRANT:

by admin
in News, Slider
0

When the eminent international jurist Raphael Lemkin introduced the word ‘genocide’ to the world in the aftermath of World War Two, his definition was clear and unequivocal.

Lemkin was a Polish Jew who fought in the resistance movement against the Nazis in the 1930s and then, as a lawyer, was responsible for framing the first UN Treaty, the Convention on the Prevention and Punishment of the Crime of Genocide.

Lemkin said that genocide – a hybrid word formed from the Greek ‘geno’, which means race or culture, and the Latin for killing ,‘cide’ – was a premeditated plan, through mass killings and other means, to destroy a group’s identity and culture and then impose the identity and culture of the oppressor. (A group could be defined as national, ethnic, racial or religious.)

There is nothing fuzzy or imprecise about this definition. It makes it relatively easy to detect and call out acts of genocide, which are regarded as the worst crimes on the UN books. Yet decades later, while these words resound with clarity in the UN charter, sovereign states across the globe continue to commit genocide with impunity, knowing they have a free pass from those countries with the power to do something about it. 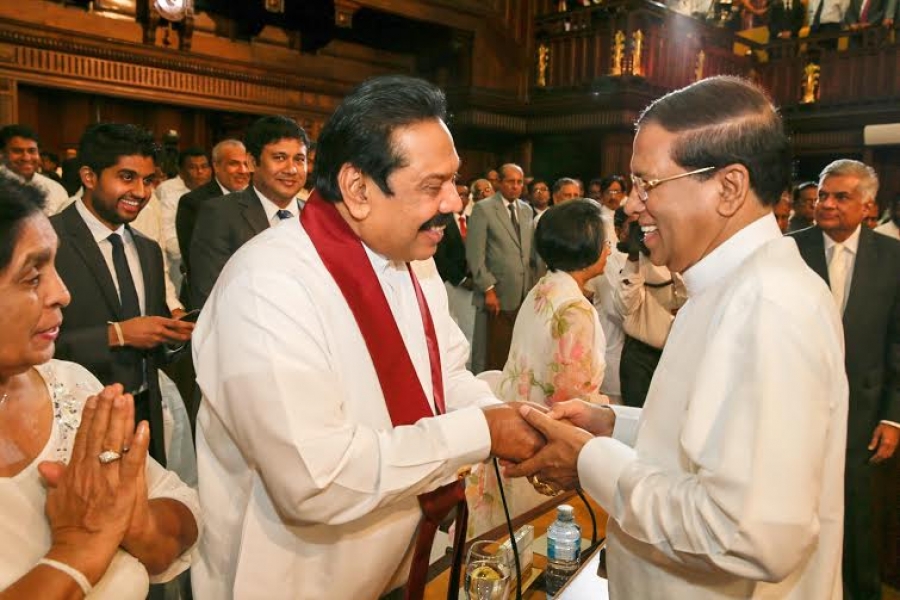 There’s no better example right now than Sri Lanka, where, with the full support of western powers as well as China and Russia, the chauvinist leaders of the Sinhalese majority have been running a genocide against the Tamil population in the north and east since the British colonisers departed in 1947.

The determination to wipe out the Tamil identity in the regions where they are predominant, and have lived as a majority for thousands of years, has never stopped. It is an unrelenting, unforgiving project that today can be defined by any number of Sinhalese government actions, the most prominent of which is the continued military occupation of the north and east six years after the end of the war that saw the disintegration of a 30-year Tamil resistance movement.

This renders laughable the election promise of the new president Maithripala Sirisena to provide a more open and free society. Indeed, when you live with military checkpoints every 500 metres down the road and endure constant observation by armed soldiers, as well as regular home visits, it’s a bit difficult to believe you live in a free and open society. Even Tamil school-kids aren’t exempt from this suffocating authoritarianism, with military commanders regularly coming to their classrooms to deliver government propaganda. And, of course, they are required to bow these great men, under threat of punishment. 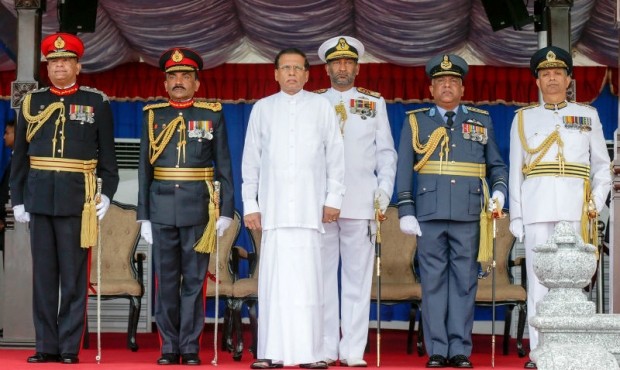 Sadly, there is no end in sight to this tyranny, given that Sirisena has vowed to maintain the military presence in the Tamil homelands, a predictable pledge from an acting defence minister in the Rajapaksa regime who boasted during the election campaign about his time spent overseeing the forces that were in the process of slaughtering up to 70,000 innocent Tamil civilians in early 2009.

Military occupations spawn all kinds of hellish outcomes for innocent civilians. And this one, which deploys one soldier for every five residents, is no different. Young Tamil men disappear into prisons, where they face torture, permanent disfigurement, physically and mentally, and often death. Hundreds of political prisoners also remain locked away in secret jails across the country. Some have been disappeared into the prison system for decades. 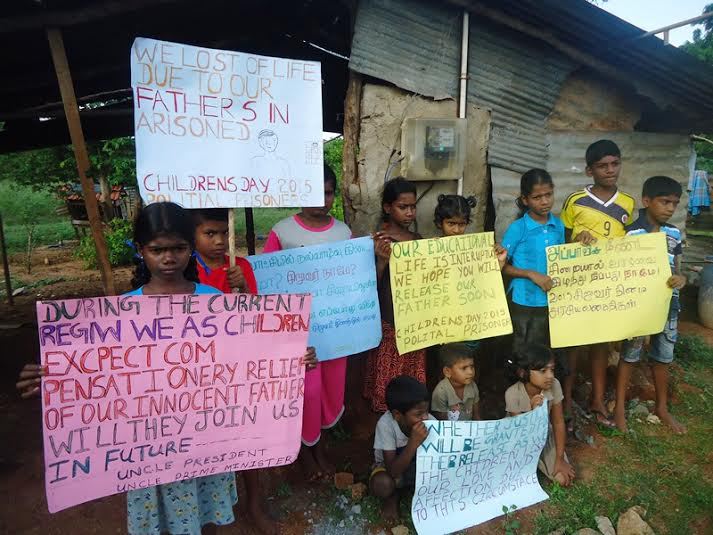 The Sirisena regime says in one forum they are going to release all prisoners, then, in another, denies there are any political detainees. The end result is preservation of the status quo, except for a few token releases designed to silence continued demands from Amnesty International and other well-informed, respected human rights groups to free these people and investigate the 146,000 reported Tamil disappearances, along with the many mass graves that have been uncovered in recent times.

Rape has also been commonplace for years. Today women still do not walk the streets late in the day or evening. The immunity from consequences granted to all military personnel for any criminal act sharply increases this threat to the population.

The military commander of the entire Jaffna region, Major-General Mahinda Hathurusinghe, had listed in his mobile phone the names of several Tamil women he used to sate his sexual appetite. Whenever he felt like fornicating with someone other than his wife, he would summon one of them by text message and rape her. They always submitted to this beast because they knew the consequences for their families if they didn’t. This became public in 2013, yet there was no inquiry, let alone a penalty.

Another sickening case, this time of gang-rape of an 11 year-old and nine year-old girl by seven sailors in the north in 2014, was quickly hidden from public view after the government intervened and ordered a magistrate to delete the names of the sailors from the court record. They were immediately re-deployed in the south, and the families of the girls who had been protesting for justice were silenced by threats to their lives from the army and police.

All genocides are multi-pronged projects, which is seen today by the gradual obliteration of Tamil identity through the destruction of their religious icons and the imposition of a foreign religion.

Only this week Tamils on an islet in the Jaffna peninsula, who are mostly Hindu, had to stand by, silently and sadly, as they witnessed the Sri Lankan Navy participate in a Buddhist ceremony, which included all-night chanting and then a senior commander laying a foundation stone for a massive statue of the Buddha. To make perfectly clear what they were all about, the government recently issued a gazette notification, changing the name of the island from the Tamil name, Nainathivu, to the Sinhala name, Nagadeepaya. 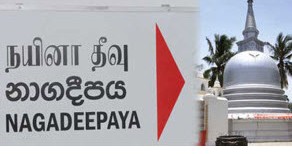 It is a weird thing to see all these Buddhist icons being built across the north and east, where no Buddhists live. The local media has estimated at least 250 Hindu temples have been knocked down and replaced by Buddhist stupas since the war ended.

Once again, it reveals the long-term genocidal plan to populate the Tamil regions with Sinhalese settlers, including soldiers. In one week alone, about 700 Sinhalese families were deposited into homes in the north – on land owned by Tamils.

Soldiers stationed in the north have been encouraged take up permanent residence there through land grants. Also, a special bonus of 100,000 rupees ($US650) is also on offer to Sinhalese military and police personnel to have a third child. Meanwhile, in Mannar region, it was revealed about 30 Tamil mothers of small children were escorted to a major regional hospital, where they were forced to have contraceptive devices sewn into their arms. If ever you needed evidence of genocide, as defined by Lemkin, it is these two stories – Tamil mothers undergoing forced contraception and wives of Sinhalese soldiers receiving financial incentives to reproduce in bigger numbers.

The property theft continues, as the military refuses to leave Tamil-owned land, claiming it is needed for high security bases yet, at the same time, using much of it to build scores of lavish resorts that are owned and run by the military. This week an expansion to the Thalsevana resort was opened by the army in its high security zone on the north coast of Jaffna, on land stolen from Tamils and seemingly never to be returned. 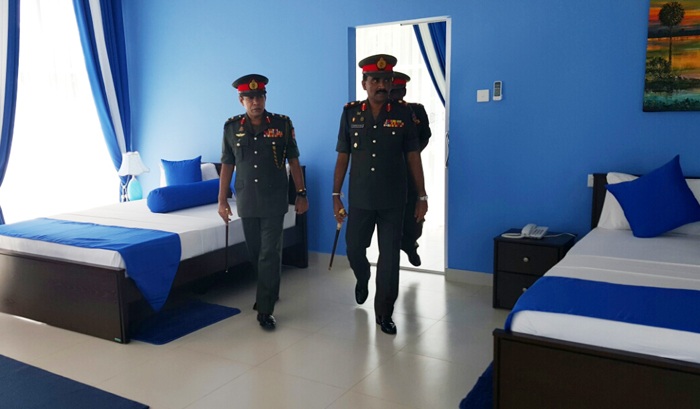 While Sirisena attempts to persuade the international community of his good intentions towards Tamils by handing back to the rightful owners a few small portions of military-controlled land, his duplicity is often quickly exposed by Tamil media. A good example is this week’s story about the military’s attempt to confiscate permanently 3524 acres of land that belongs to Tamil farmers in a village in Mannar province. The Jaffna District Secretariat found that 7393 acres of Tamil-owned land in its region was under military occupation, keeping 10,495 people off their land and houses and living in appalling makeshift accommodation. 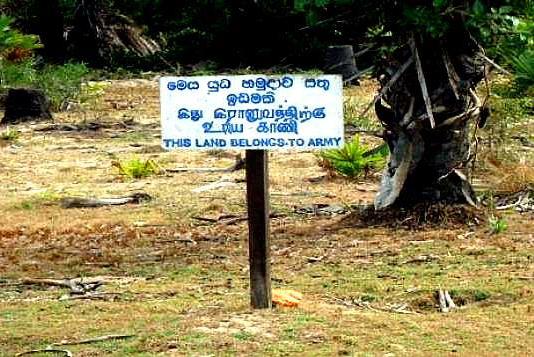 You can pick any date, any decade, since the Sinhalese, who represent 75 per cent of the population, assumed power in 1947, and you will find evidence that equates with the definition of genocide. Every government, from the first, under D.S Senanayake in 1947 to the current one under Sirisena, has bristled with the same ingrained superiority complex that sees Tamils as unwanted tenants on an island that belongs only to the Sinhalese. (Of course, the undeniable fact that Tamils have been there since pre-historic times is conveniently written out of official Sinhalese history to allow the myth to prosper.)

The first obvious genocidal act came in 1948 when one million Tamils were immediately disenfranchised, and many deported, in order to silence any effective Tamil voice in parliament.

That done, they then wiped out the livelihoods of hundreds of thousands of Tamils worked in the public service in 1956 by declaring Sinhala as the only language permitted in government jobs, supplanting English, which the Tamils had spoken for generations. It was impossible to learn quickly enough what was a foreign language to Tamils and they were thrown out of work en masse.

When Tamils began non-violent demonstrations outside parliament and other prominent places, they were viciously assaulted by the military and the police acting under government orders. 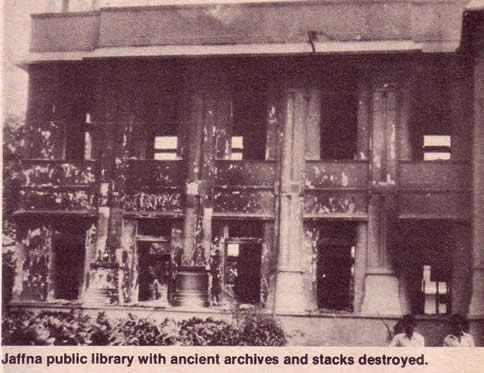 Government involvement in violence against Tamils continued, with the burning down of the Jaffna library in 1981, in which 95,000 books and invaluable ancient palm leaf manuscripts were lost. Then came the mother of all pogroms, in 1983, when thousands of Tamils were murdered, some being burned to death in the streets while their Sinhalese attackers danced around them. History now records that government officials were up to their necks in both outrages. 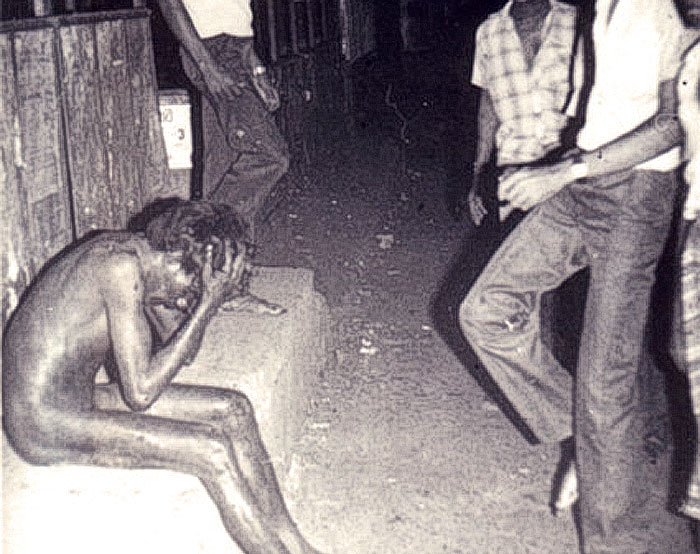 History also shows that foreign governments, such as the UK, the US and Australia, have been up to their necks in supporting the worst actions of successive oppressive regimes during the 27-year war against the Tamil Tigers, and well after it.

The UK supplied arms and advisers who were involved in civilian killings in the 1980s that amount to war crimes, the US supplied arms that included illegal cluster bombs and white phosphorous for many years during the war, and since the war ended in May, 2009, Australia has been supplying naval patrol boats and intelligence co-operation to help Sri Lanka stop Tamils, who have suffered torture, rape and beatings in filthy jails, fleeing the island to save their lives and seek asylum in places such as Australia.

Only two years ago, at the Commonwealth Heads of Government meeting in Colombo, the former Australian Prime Minister, Tony Abbott, enlightened the world about Australia’s approach to the evil practices of the Sinhalese supremacists who run Sri Lanka. Asked about the well-documented torture of Tamils in Sri Lankan jails, Abbott said: “….In difficult circumstances, difficult things happen.”

Abbott had broken new ground as the first Australian Prime Minister to condone torture. It was a startling comment that reflected the current decline in decent, human values amongst our rulers. Just as shocking is the continued support for the Sri Lankan regime by Australia and the major western powers.

By doing so, these governments are not just denying a genocide but actively participating in its’ prosecution. As Raphael Lemkin outlined in 1948, in the very first UN charter, there is no greater state crime.

With Sri Lanka Elections a few days away, what are the options for the Tamil people?