by admin
in News
0

Urging the UN to stick to its original decision and release its war-crimes probe report as scheduled in March, a large number of Jaffna University students, teachers and members of the civil society organisations held a massive protest rally in Jaffna today.

The protest rally which began at 10 in the morning opposite the Jaffna University ended at Nallur Murugan Temple where the organisers handed over a memorandum to Mannar Bishop Rayappu Joseph to be sent to UN Human Rights High Commissioner Zeid Ra’ad Al Hussein, demanding him to release the war-crimes probe report and ensure justice to hundreds of thousands of war survivorsin Sri Lanka’s north-east.

Several hundreds of war survivors, relatives and families of disappeared people, several Tamil political party members, parliamentarians and provincial councillors participated in this rally organised by the Jaffna University Community and Public Organisations. The participants also reportedly included some of the Sinhalese students studying at the Jaffna University who willingly showed their solidarity to the demand for justice. 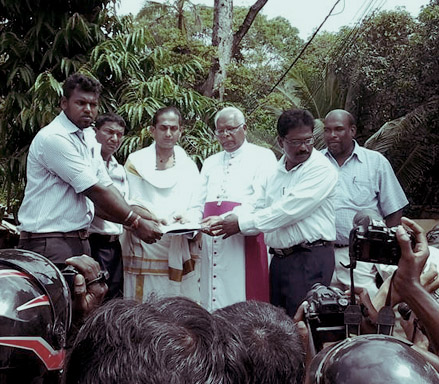 The protestors were holding banners and placards and chanting slogans such as: “Release the report in March”, “Deferral might divert our struggle for justice”, “International Community – Please listen to our plea”, “Without demilitarisation, no Change”, “We want North-East to be De-militarised Zone (DMZ)” and “Criminals responsible cannot  investigate themselves “.

Mannar Bishop Rayappu Joseph, speaking at the rally said although over 146,000 people had been killed during the final weeks of the war that ended in May 2009, no justice has been delivered to date. Under these circumstances, he said that the decision to delay the UN report has come as a rude shock and disappointed the victimised people.

“War criminal Mahinda Rajapaksa who gave orders to carry out this war, set up a commission to probe their own crimes. How can we trust a process in which the criminal is the judge. Tamils trust this new government, but certainly not on the issue of war crime probe. It is under these circumstances that they relied on the UNHRC report for justice. The deferral has deeply disappointed them. We urge the UN Human Rights High Commissioner to release the report in March because justice delayed is justice denied,” Rayappu Joseph said. 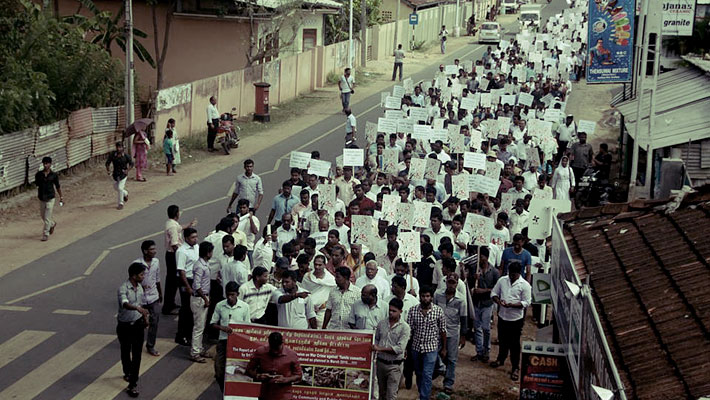 The war survivors in Sri Lanka’s embattled northern and eastern provinces staged several protests for the past few weeks pleading the UNHRC not to defer the report and thereby refrain from repeating its mistake in May 2009 when the war was brought to a bloody end.

However, conceding to the request by Colombo, the UN Human Rights High Commissioner on February 16 deferred the publication of the report of the probe into Sri Lanka’s war crimes and crimes against humanity.

“There should be no misunderstanding. I give my personal, absolute and unshakable commitment that the report will be published by September,” Zeid said after recommending the UN Human Rights Council to defer the report.

Jaffna University Teachers’ Association President A. Rasakumaran urged the international community especially the UN and its Human Rights High Commissioner “not take sides and to be impartial in delivering justice for the victimised people around the world”.

“Human rights violations have been committed against the Tamils on a mass scale. This includes war crimes, mass-scale arrests, abductions and illegal detentions. These cannot be investigated independently by a domestic process. Those in new government were members of the previous government, which committed the crime. They supported the deposed regime when all these crimes were being committed,” he has told.

“Therefore, we cannot rely on any domestic probe. We urge the international community and the UN to adhere to an honest approach in delivering justice to the war-hit Tamils in Sri Lanka. We will continue to fight for our justice democratically,” he said. ☐

‘13A can never be the final solution’ says Chief Minister Wigneswaran