The reinforcement of The Vaddukkoddai Resolution in a seminar in Germany

A seminar was convened on 14.5.2016 in the city of Bochum in Germany, commemorating the 40th anniversary of The Vaddukkoddai Resolution (V.K.R), in order to ascertain the right of self determination of the Tamils (in Tamil Eelam).Many dignitaries, politicians, human rights activist and journalists took part along with the public. The function , which commenced by about 2.30 P.M ,with the hoisting of the Tamil National flag , came to an end by 8.00 p.m. Floral tributes were made to all those who sacrificed and dedicated their lives during the Tamils’ struggle for freedom. 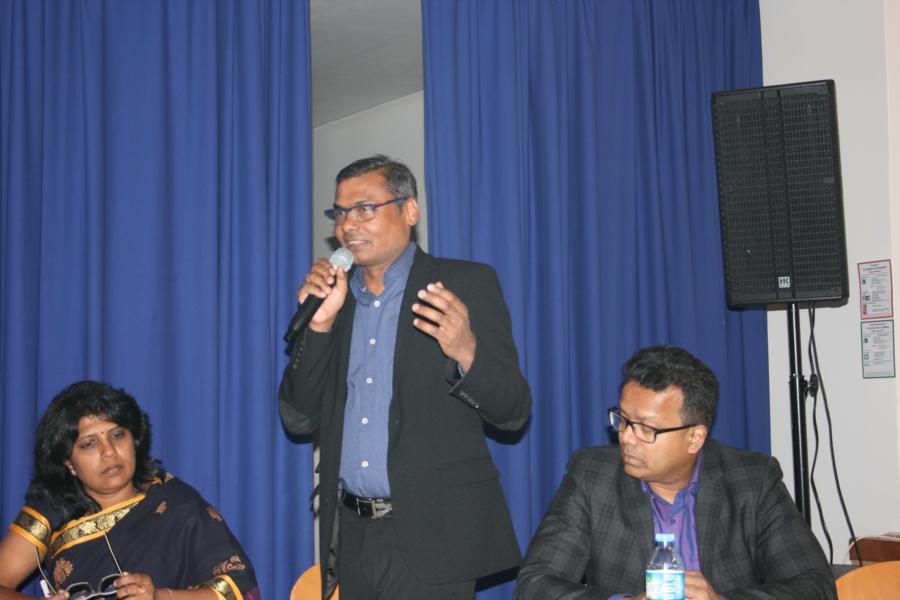 The seminar was convened by the international council of Eelam Tamils in the name of ‘The Vaddukkoddai Resolution’. Steven Pushparajah, the spokesman for the above organisation, while welcoming the participants , mentioned that TGTE, international Tamil Youth organisation and ICET too joined in this pursuit of reinforcing the V.K.R It is noteworthy that TGTE had also organising a similar seminars in New York. We had the first event in Stockholm In March.

Sriravindranathan of Tamils’ Coordinating Committee (T.C.C), Germany, mentioned that his organisation will align itself with those organisations which function with a united consensus. It will also offer continued support to the international council of Eelam Tamils.

Mrs Sugi Gopi, a social worker and journalist, facilitated the rest of the event. The dance performance by Miss Anchana Pakirathan, invoking the sentiments of the Tamil nation, was well applauded.
Mr.Prakash Padayachi of the Tamils’ solidarity group in South Africa, spoke (via Skype), about the contribution made by his organisation to Eelam Tamils. While mentioning about the efforts of South African government to form the Truth and Reconciliation Commission, he asserted that his firm opinion was that it will be utterly useless to establish any such commission, until a political solution is reached. He also mentioned that a seminar similar to the one convened last year, has to be organised encompassing the various arms of the Tamil diaspora. 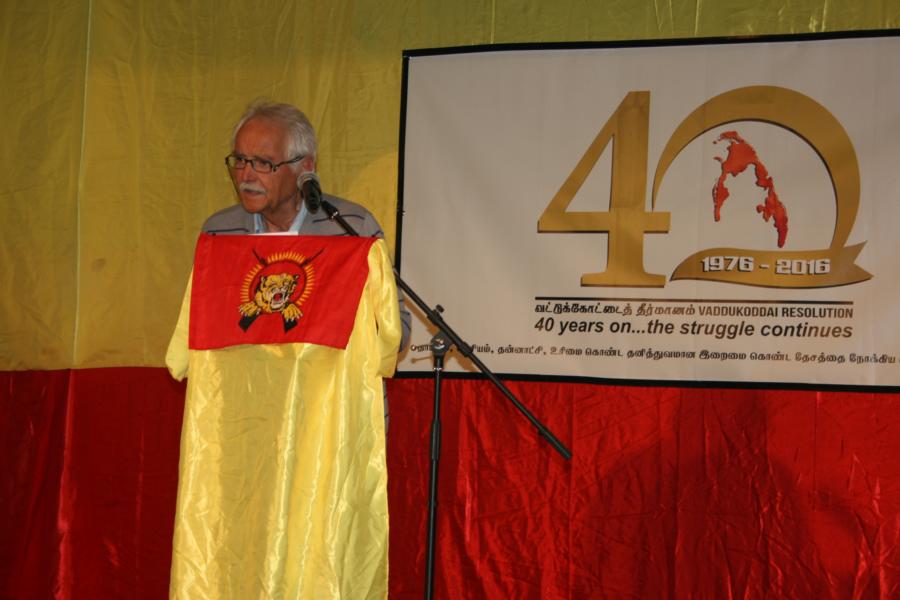 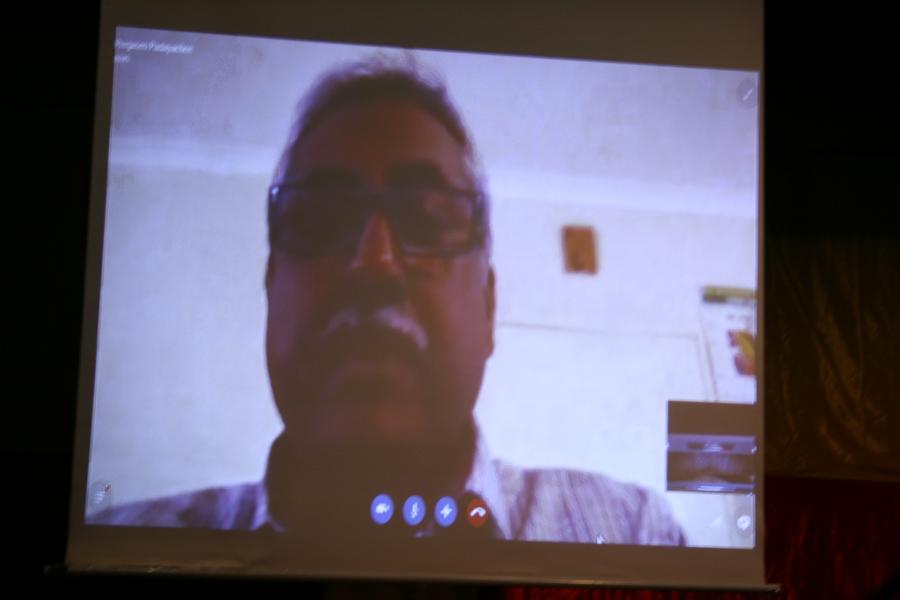 Prof Peter schalk mentioned about the role played by Sir Pon Arunachalam and Chellappa Suntharalingam in arousing the feeling of Tamil nationalism. He said that one cannot forget the initiative Sunderalingam made on the need for a separate Tamil Homeland.

Dr zarni, a human rights activist, mentioned that the fact that Eelam Tamils are continuing with their political pursuits, even after a lapse of nearly 7 years after the genocide of 2009, shows the commitment of the people to their aim He mentioned that the oppressed underdogs should unite with comradeship and root out the evils. He said that the cause for the genocides in Eelam and Rohingya have been international geo politics
During a discussion about ‘accepting responsibility and international justice for the genocide of Tamils’ , Prof.Sri Ranjan, President of The International council of Eelam Tamils, journalist Nirmanusan Balasundaram and Dr Elilan Naganathan of Tamil Nadu made their contributions through Skype, whereas Mr Vibhishan of International Youth organisation participated directly responding promptly to comments and queries from the house. 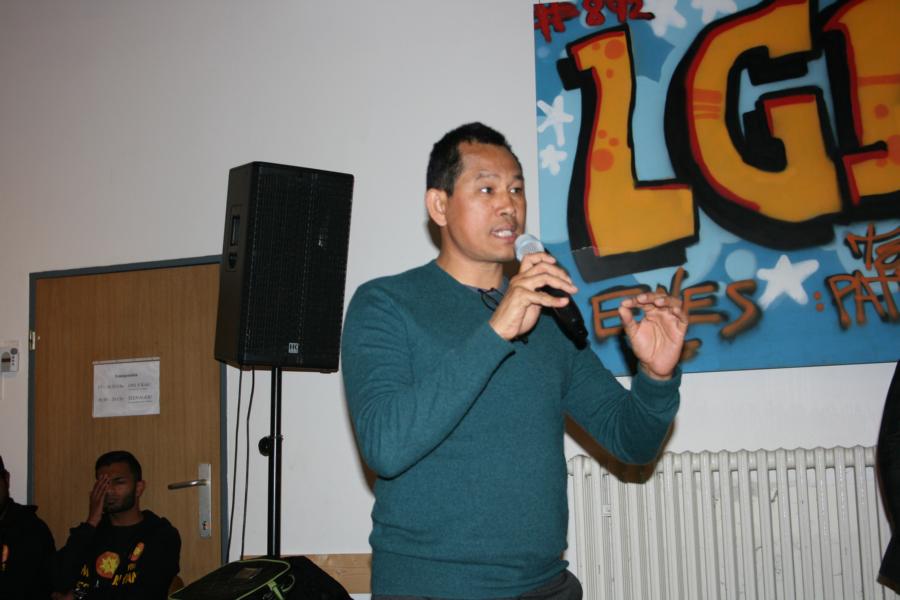 Mr Suthanraj, minister in charge of media, TGTE emphasised that the provisions in the V.K.R should be followed through to the very end and should not turn out to be empty rhetoric He also described the steps that were planned to be taken by TGTE in this respect.

Mr Rajan drew the attention of the house to the plight of those who were the backbone of our freedom struggle and insisted that the diaspora should help them in their resettlement. This should be followed simultaneously parallel to the path of political endeavours. As this is an opportunity for various organisations to get together, this must be utilised to involve wholeheartedly in our struggle , instead of using it for mere lip service with a shallow agenda.

Finally, addressing on the topic ‘V.R and other resolutions following it’, journalist Gopi Ratnam explained how the aspiration for self-determination by various communities have been internationalised through the Westphalian agreement.

Mr.Chelian from T.C.C Germany and Mr.Sathiathasan from T.C.C France also spoke. The latter mentioned that V.K.R must not only used to reflect its past history, but must be used as the target for our future political goal.
The function had its merits elevated due to the serious issues raised by Jude, Jeya, Eelaventhan and others alike. Along with the wholehearted support of the participants, the seminar came to an end with the vow that all have to unite in involving in their service to the Tamil cause. 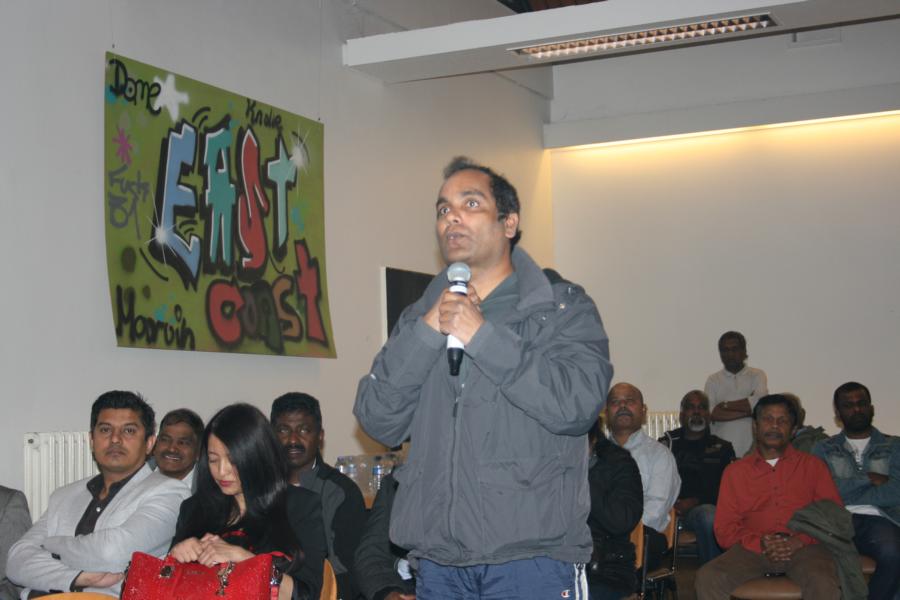 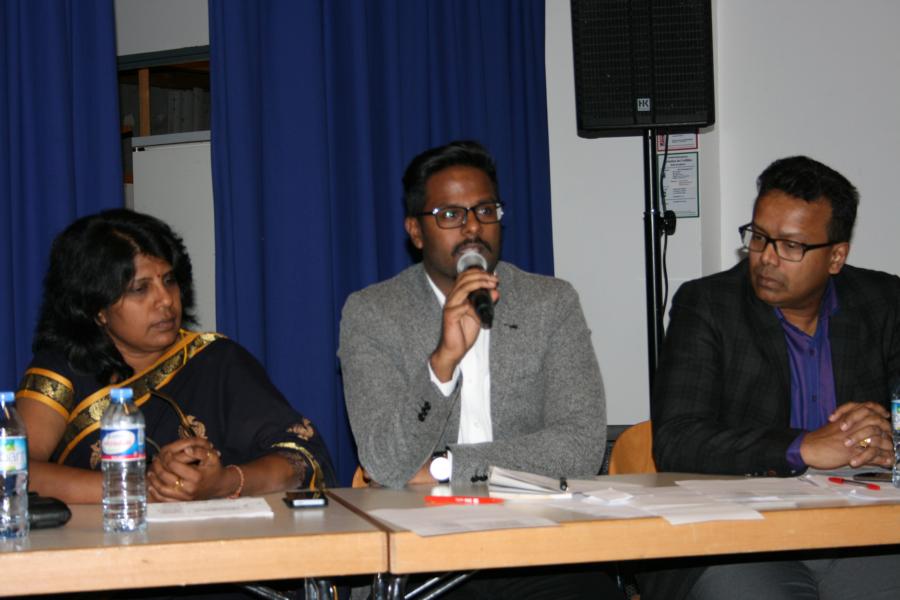 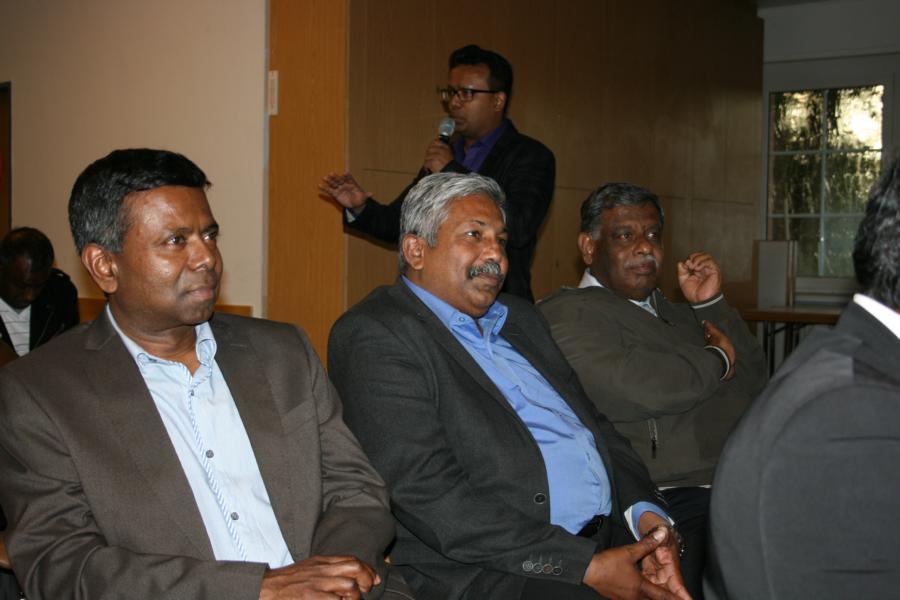 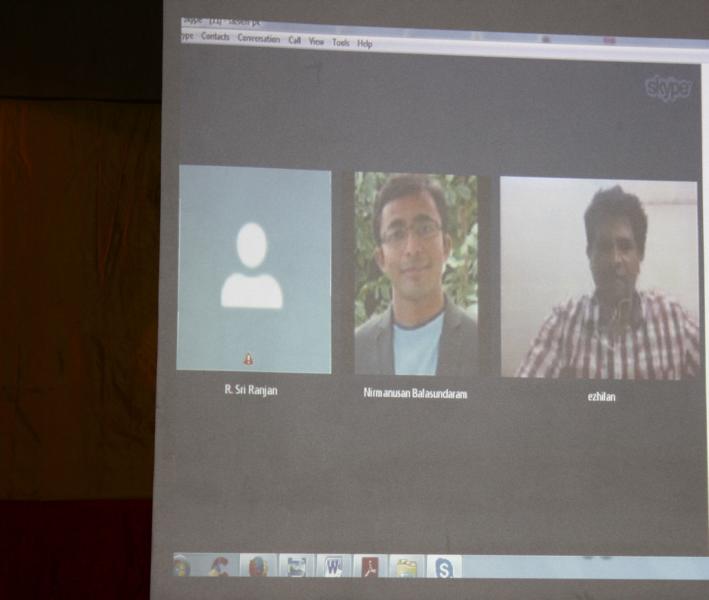 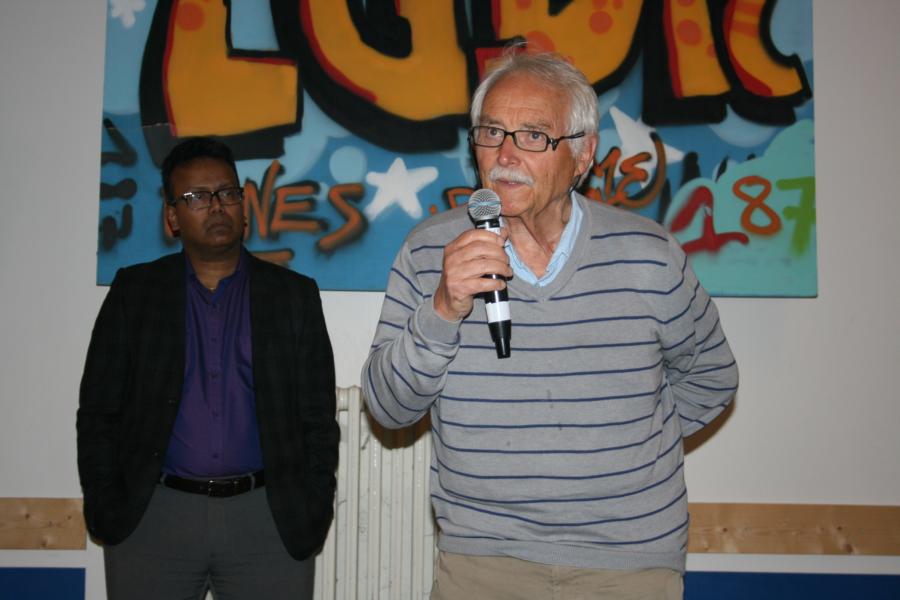 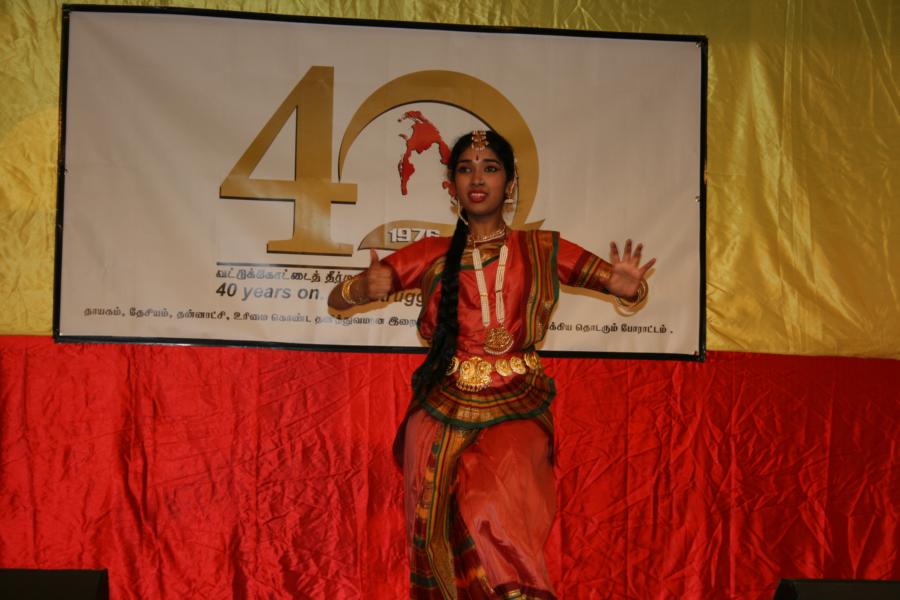 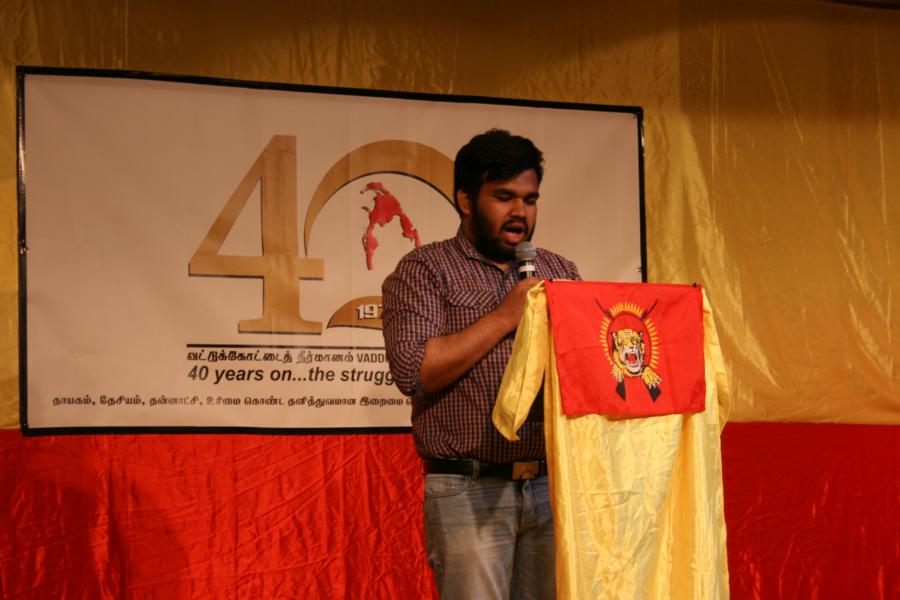 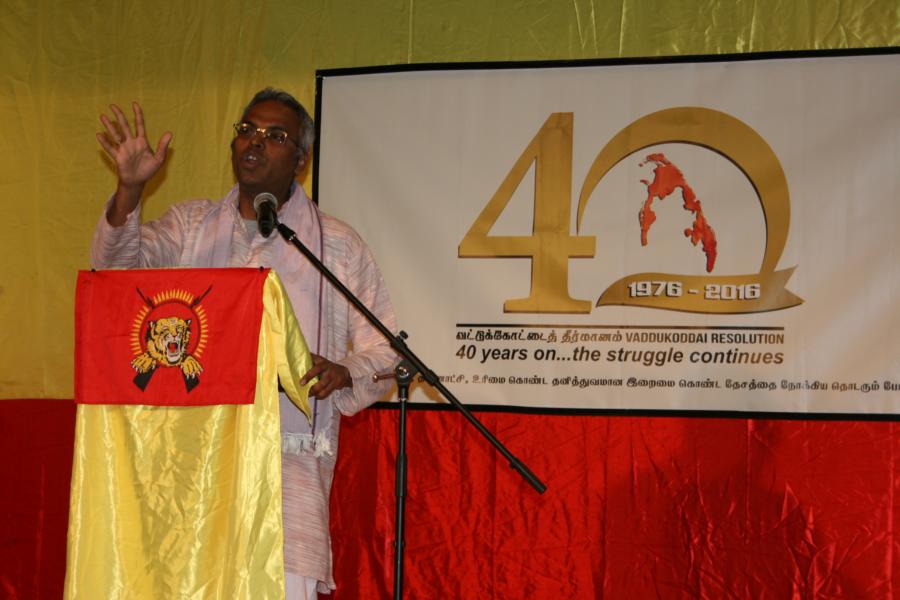